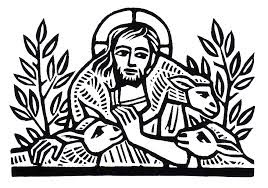 Today was a festive day at St. Mark's.  We celebrated the Feast of St. Mark with a wonderful Italian-themed potluck lunch.  We blessed the new doors to our sanctuary.  We welcomed a larger than usual congregation of friends, neighbors and extended family.  We welcomed our rector, Suzanne, back from her week away on vacation.  All in all, it was a wonderful way to mark 50 years of St. Mark's ministry in Westford.

Today is also the Fourth Sunday of Easter, traditionally recognized as Good Shepherd Sunday.  The readings for today spoke about Jesus as our Good Shepherd.  We read the 23rd psalm, sang a hymn based on that psalm, and our Gospel reading from John 10:11-18 was as follows:

11 “I am the good shepherd. The good shepherd lays down his life for the sheep. 12 The hired hand, who is not the shepherd and does not own the sheep, sees the wolf coming and leaves the sheep and runs away—and the wolf snatches them and scatters them. 13 The hired hand runs away because a hired hand does not care for the sheep. 14 I am the good shepherd. I know my own and my own know me, 15 just as the Father knows me and I know the Father. And I lay down my life for the sheep. 16 I have other sheep that do not belong to this fold. I must bring them also, and they will listen to my voice. So there will be one flock, one shepherd. 17 For this reason the Father loves me, because I lay down my life in order to take it up again. 18 No one takes[a] it from me, but I lay it down of my own accord. I have power to lay it down, and I have power to take it up again. I have received this command from my Father.”

We were treated to the guest preaching of one of our parishioners, Nancy MacDonald, who spoke about the role of the Good Shepherd in her life.  She described the reasons she follows Jesus, our Shepherd.  I, too, want to be a sheep in God's marvelous flock. With Nancy's permission, her sermon is printed here.  Thank you, Nancy, for your inspiring testimony.

Why did Jesus use a shepherd to illustrate who he was?  In Psalm 80: God was called the shepherd of Israel.  In the 23rd Psalm King David said the Lord is my shepherd. The Prophet Ezekiel, in predicting the coming of the Messiah, called him a shepherd. (Ezekiel 34:23)  So, Jesus stood before the religious leaders of Israel proclaiming very clearly “I am the Good Shepherd”. He used a term or profession that was readily understood by the people at that time.  In Bible times, at the end of the day the sheep were gathered from the fields and put into pens or folds made of stone or rocks. The walls could be quite tall (up to 10 ft) to deter predators such as wild animals or men (robbers and thieves) from climbing over the walls to kill or steal the sheep.  The only correct way to get into the fold was to go through a very narrow gate. The shepherd would sleep across this gate at night. He was willing to die for his flock, but the hired hands who aided in the herding of the sheep they were not willing to die. They worked for money to live on that’s all. So, in the morning, the shepherds would go to the gate one by one calling their sheep. They had a certain call or whistle that only their sheep knew.  This is still true in modern sheep farming.

There was a story about a man who lived in Australia who was accused of stealing a sheep from another farmer.  So, the case was taken to court. It was presented in front of the judge.  He heard both sides and then; he decided to settle the case in a very non-traditional way.  He had the plaintiff go out of the courtroom, re-enter and call the sheep. He called to the sheep but sheep did not come. He acted afraid and nervous.   The second man entered (the defendant) and he called to the sheep.  The sheep ran to him gleefully. Case dismissed.

The shepherd was to guide his flock through many obstacles. When crossing a body of water, the shepherd would have his obedient well seasoned sheep cross first. He would just have to raise his crook and across they would go leading the others.  The challenging sheep who really didn’t want to cross he would gently nudge along with his crook.  The last group was the young lambs who got separated from their mothers. He would have to go looking for them for hours. He would carry them back to the flock. Something interesting would happen. The sheep would circle around the shepherd holding the lost sheep and they would bleat loudly as if to say “thank you”.

I have heard many sermons on “The Good Shepherd”. Many of the sermons illustrated how dumb sheep are.  It irritated me because I knew I was one of those sheep. But as I researched what a shepherd actually does. Here are more examples: He protects the sheep vigilantly, heals their wounds by rubbing olive oil on them and my friend Dorothy told me in Bible Study last Friday night that the shepherds would put the olive oil on the sheep because they would have these flies or gnats that would get into their eyes and mouth, so the shepherd would put the oil around their nostrils and head to protect them from getting to them (King David may have alluded to this in the 23rd Psalm: He anointed my head with oil), a shepherd will never give up looking for his sheep, he shears, feeds and waters the sheep,  he keeps watch over them day and night.  I imagine living in that herd, you didn’t have to worry about being fed, protected, healed and that shepherd loved you so much he was willing to die for you. I don’t know about you but I want to be a sheep. I want to follow the Good Shepherd and I have been following the Good Shepherd for a long time…sometimes I’m that little lost sheep He had to carry back, I’ve been the challenging sheep that needed poking and prodding, I hope I’m moving into that seasoned sheep where the Good Shepherd has just raise His crook and I’ll go…

I know my Shepherd’s call.  For me, it’s a reoccurring, persistent thought that just won’t leave me. The thought or action usually has something to do with serving or helping others.  I remember one call while I was living in Texas.  I was a preschool teacher at our church Living Word.  They started a preschool and they couldn’t find a teacher for the 2 year-old class. Guess who volunteered. It was fun. I had a great teaching partner her name was Nancy, too. But at that same time, I got another call for a really great volunteer job. I heard about the Therapeutic Riding Ranch in Justin. They work with children with special needs. I was so excited. I got to work with children and horses! My two favorite things to do!  So, I set-up my orientation visit and because of my experience with horses I could start that day after orientation. I had a map quest print out (text only) but as soon as I turned off the major highway on to the secondary roads I became very lost.  I almost turned around but something rose up inside of me and I pulled into a gas station. No, I didn’t ask directions. I prayed to The Good Shepherd for help.  Lord, I am so lost. I really want to go to this ranch but the evil one is trying to discourage me.  Please guide me to the ranch, I’m listening. I’m sure I said a quick amen.  I had lost it a little, so I wiped the tears from my eyes pulled myself together. I had a strong urge to go right, out of the driveway I went and turned right. Keep driving (I heard another thought). I drove for another half hour until I saw a sign for Justin. I road three more miles until I saw the Therapeutic Riding Ranch sign on the right, I turned right and then another right into the ranch. Thank you, Lord for guiding me safely to the ranch. I had the best day ever. I missed a little of the orientation but that’s okay.  I knew what I was doing. I groomed, saddled, and bridled the horse for my student. I learned about the mounting block and how the student was to mount the horse. I loved my little 3 year old student.  I lead her around the ring about 3 times when she started to get a little bored so I started singing to her some of our preschool songs. This little light of mine, Barney songs; we were having a great time.  At the end, I helped my student dismount back at the block and hugged her good-bye.

After I finished grooming my horse, I went to the main barn to sign-out. I saw a man sitting in a wheelchair. He had Cerebral Palsy. He was a mess. His seat belt wasn’t holding him in his chair well. He was having trouble controlling his movements but he waved me over to him. There were some women standing around him. They introduced me to Jim. He was the founding Director of the Therapeutic Riding Ranch and he competed in Horse Shows. They told me you cannot tell Jim has special needs when he rides a horse because something happens when he mounts the horse. The horse senses his special needs and accommodates for him.  Jim started to speak to me. I had to listen very carefully but I understood what he said. “I like that you sing to your student, please come back.”  “Oh yes, I will. I enjoyed working with my student.” I don’t know what possessed me to ask but I wanted to know how Jim got to work every day?  The ladies laughed and pointed to a car that was parked very crookedly outside the barn. That’s Jim’s car. He has hand controls and drives in every day. I was amazed.  I decided right then and there that day, that I would never say I couldn’t do something or it’s too hard.  I can do all things through Jesus Christ who strengthens me.  I will live this Bible verse. If Jim can overcome all of his difficulties and challenges to start a riding ranch that will help hundreds of children then what’s my excuse.  I was completely humbled.  The Good Shepherd had led me to a very special place where I learn a very valuable lesson. My faith was growing in leaps and bounds (no pun intended).

I want to be a sheep. I feel great comfort in knowing my Shepherd is watching over me day and night. He is providing me with everything I need to live a purposeful and abundant life.  Sometimes I feel His love so immensely it overwhelms me. My prayer for you is this that you will hear the Good Shepherd’s call. When the call comes you will go and have a great experience. Your faith will grow! I pray you’ll feel the Good Shepherd’s abiding and abundant love now and forever. 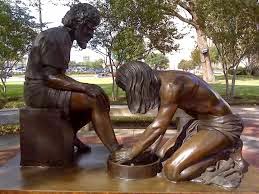